Varazs Vizslas has 3 birthdays in June!  Yesterday, one litter turned six and today, the eight puppies from our 2006 litter turn 8!
Hence, 8 for 8!

Happy 8th Birthday to our 2006 litter born June 17th.  The 8 puppies turning 8 are:  Lucy 1, Lucy 2, Nika, Ruby1, Lloyd, Tessie, Tucker and our Tyro . They are out of Am/Can/Int'l Ch Kizmar Touch of Evil CD RE JH (Hudson)  and our  Nova (CH Ferngold Varazs Innovation Can/Am CD, FDJ, JH, Can/Am RA, Am RE, Am RAE, CGN.)  Many people mistake Tyro for a puppy because of his high energy and youthful appearance!! He doesn't have much grey hair except for a bit under his chin.

We have 3 birthdays in June!  Today one litter has a birthday and tomorrow, another does. And then in 10 more days, our 2003 litter turns 11.

Happy 6th Birthday to our 2008 litter born June 16th.  The 6 puppies turning 6 - hence 6 for 6 are:  Andras, Blaze, our Diva, Gunner, Quest and Piper. They are out of Ch Hubertus Quality Control FDj (Ozzie) imported from Australia and our Miska (Ch Varazs Kiralyi Kedvesem etc etc etc.)

"Mother Nature may be forgiving this year, or next year, but eventually she's going to come around and whack you. You've got to be prepared."
Geraldo Rivera

A severe ice storm occurred on December 21, 2013 in Ontario and other NE states and we got whacked!!  BIG TIME!! The rural area where we live in SW Ontario is heavily treed and damage was major and extensive. Thousands of people just in our municipality were without electricity and heat for days and weeks, including over Christmas. I have no photos of what our property looked like because we were away at the time but here is a video taken of a street in Brampton, Ontario (east of us) which gives you an idea of the devastation to huge, stately trees.

We have 10 acres and most of it is treed. Heavily ice-laden trees like you see in the video above, snapped like pretzels and brought down one hydro pole (we call it hydro here in Ontario) and smashed our transformer drum and damaged a second hydro pole running down our driveway. (We have 3 poles on our land.)  A transformer drum carries 7,200 volts of power and reduces it to 240 for the house. Fortunately the wires were dead because all power was out in our area.  We couldn't get a hold of any crews to come and repair our electrical lines since they were all busy restoring power to cities and towns. Crews were called in from out of province and from US states to assist in the clean up and restoration of power.  There was almost no point because no one could get up our driveway anyway because of all the downed trees and major limbs.

It took over 1 month before we could get anyone out to clear our driveway,  It took 2 more months to get our power restored in one of the coldest and longest winters on record. There were lots of reasons for that which I won't bore you with. Needless to say, our house was inhabitable for that length of time. Although we had the water turned off and the pipes drained, we still had some water damage inside the house but compared to many homes, ours was minimal.  I try to look on the bright side - no trees actually fell on our house; damage inside was minimal; we saved on heating fuel and electricity and now we have a ton of firewood for our wood stove!! LOL. Our house was intact even though it's now inconvenient to drag dirty laundry to a laundromat because the valve to the washing machine is broken (we're still waiting for the insurance-approved appliance guy to replace it) and a pipe in our ensuite shower was frozen and we're waiting for the plumber to find a replacement & then get the shower retiled. Our roof also leaked because of an ice dam.  But that's nothing compared to what people whose homes are completely destroyed in floods, wild fires, hurricanes or tornadoes have to deal with physically and psychologically.

This short video gives you a little bit of an idea of what we faced after all the snow melted. I know it looked far worse with ice on the trees back in December.

Stella and Bodi (from our 2011 breeding between Brick and Miska born May 31) who just celebrated their 3rd birthday, were very busy on their birthdays earning new titles!!!  Stella and her hu-mom competed in a Cdn Association of Rally Obedience (CARO) trial to earn her Rally Advanced (RA) title and Bodi was in the US completing his Americah Kennel Club (AKC) Rally Novice (RN) title.  So two sibs and two titles on their third birthday!

And Bodi also earned two more AKC Coursing Ability Advanced legs while he was at it on his birthday weekend. That's as in "lure coursing"!

PS - photos are courtesy of the dogs' owners. 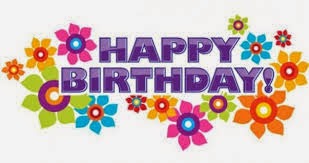 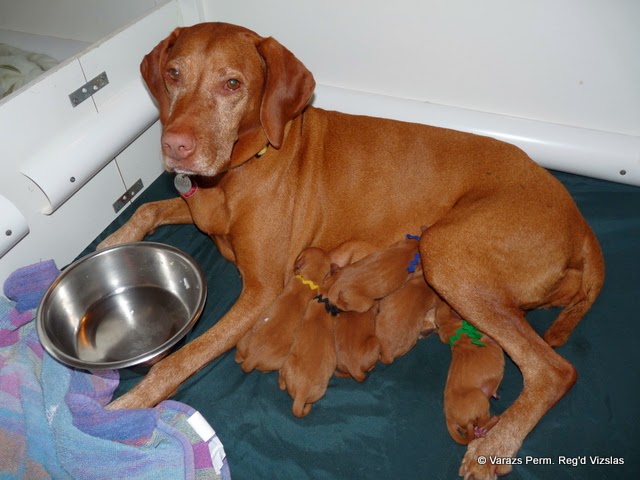 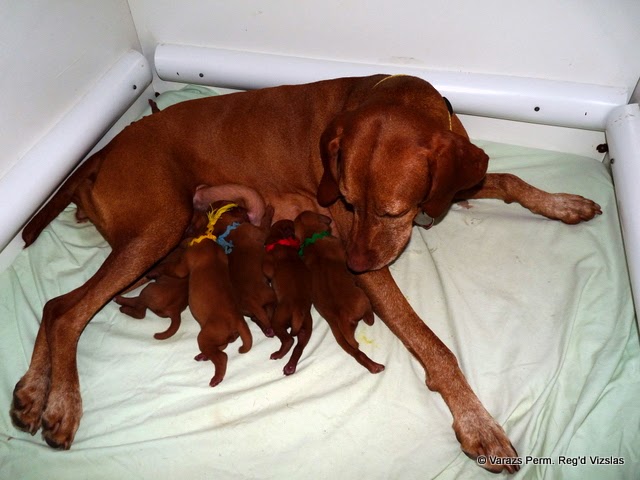 From our first litter 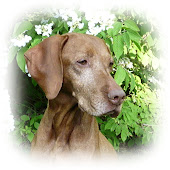 Our Beds of Choice 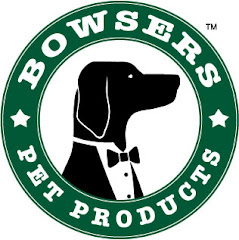 Best Beds in the World!

Our Winter Coat of Choice

My Blog is Listed

I'd Buy a Vizsla From

Get Your Vizsla Fix